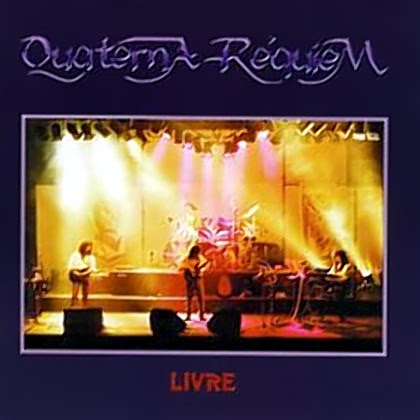 Quaterna Requiem emerged as one of Brazil's finest bands during the '90s at a time when, coincidentally, symphonic prog was going through something of a resurgence. Judging by the number of reviews here at PA the band isn't that well known, so it might be helpful for me to mention that they are often compared to Camel; there are certainly similarities to The Snow Goose. This live album from 1999 proved to be their last, although Elisa Wiermann teamed up with original bandmate Kleber Vogel for 2003's A Mao Livre. In fact Vogel also makes a guest appearance on this recording, playing violin on the final track Velha Gravura. This is the only track from the band's debut to make the set list here, which is maybe a bit surprising. There are a couple of previously unrecorded tracks, namely Triade and Solo De Bateria (although the latter is basically a drum solo as the title suggests). The remaining three pieces are culled from Quasimodo. The recording itself is taken from a concert at the Teatro Scala in Rio de Janeiro; the sound quality is excellent. Quaterna Requiem's brand of symphonic prog is influenced by Classical music although this influence reaches far beyond, as far as the medieval period. They aren't as adventurous as the likes of Gentle Giant however; their music is much more straightforward. Nonetheless this set kicks off with Fanfarra, which starts out sounding pretty much like a Middle Ages fanfare played on electric instruments. This is a wonderfully energetic version of the tune that has Jose Crivano's biting guitar vying with Elisa Wiermann's synthesizer for the main focus of attention. This is followed by Quasimodo, or at least a heavily truncated version of the track. The original piece from the album of the same name clocked in at over 38 minutes. This one is shortened to just over 19 minutes and it's missing the crumhorns, the acoustic guitar and recorders, the serene church organ and Gregorian chanting. Still, the musicianship is top- notch and it's an epic performance given the labyrinthine nature of the track. Quaterna Requiem certainly loses much of its sophistication in the live setting, but makes up for it with a slight rawness that possibly carries more of a sting. One of the band members makes some announcements prior to the next track, Triade. Of course he speaks in Portuguese so I haven't a scooby what he says. Anyway Triade isn't as strong as the established material here, but I suppose it's nice to have some new stuff alongside the older tracks. The mighty Irmaos Grimm follows, and for me this epitomizes Quaterna Requiem's comely fusion of medieval flourishes with soft progressive rock. Moody in places, maybe even brooding, but also burning with fiery energy and always highly melodic. Drummer Claudio Dantas's thunderous showcase Solo De Bateria leads us to the final track, the 23-minute version of Velha Gravura. Whereas the studio cut of Quasimodo has been abridged to half its length for this live performance, Velha Gravura has been doubled to make room for some protracted solos. It features Kleber Vogel, whose elegant violin playing is coloured with washes of pathos. Enchanting. The band show that they can rock as well though, and all the musicians get the chance to shine. Vogel screeches and scrapes alongside Crivano's virtuoso guitarwork and Wiermann's firecracker keyboards. Splendid... more dynamic and even better than the original. This album is a fine introduction to Quaterna Requiem although I'd probably recommend the studio albums, both of which are excellent, ahead of his.