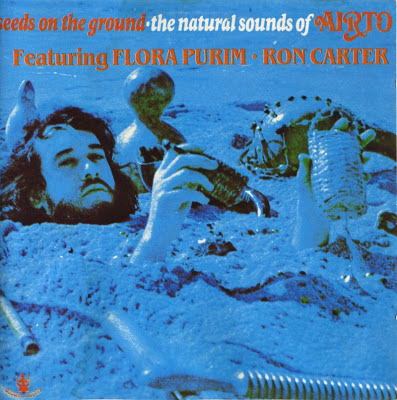 Airto Moreíra was born in 1941 in the small village of Itaipolis, Brasil. Even before he could walk he would start shaking and banging on the floor everytime the radio played a hot song. This worried his mother, but his grandmother recognized his potential and encouraged him to express himself. By the time he was six years old he had won many music contests by singing and playing percussion. The city gave him his own radio program every Saturday afternoon. At thirteen he became a professional musician, playing percussion and singing in a dance band called Jazz Estrela.
He moved to Sao Paulo at the age of sixteen and played regularly at the night clubs as a percussionist and drummer. In 1965 he moved to Rio de Janeiro where he later met his future wife, singer, Flora Purim. Flora moved out to Los Angeles in 1968, Airto followed her shortly there after.
The couple soon moved to New York where Flora was singing with south African singer Miriam Makeba and Airto began playing with musicians such as Reggie Workman, JJ Johnson, Cedar Walton and bassist Walter Booker.
It was through Booker that Airto began playing with the greats Cannonball Adderley, Lee Morgan, Paul Desmond and Joe Zawinul. Zawinul recommended Airto to Miles Davis for a recording session in 1970. Davis then invited Airto to join his group which included such jazz icons as Wayne Shorter, Dave Holland, Jack DeJohnette, Chick Corea and later JohnMcLaughlin and Keith Jarrett. Airto remained with Miles for two years and he appears on such releases as Live/Evil, Live at the Fillmore, The Isle of Wight, Bitches Brew, On the Corner, and others.
Airto was then invited to form the original Weather Report with Wayne Shorter, Joe Zawinul, Miroslav Vitous and Alphonse Mouzon. Soon after he joined Chick Corea's original Return to Forever group which featured Flora Purim, Joe Farrell and Stanley Clarke. Other artists Airto has performed and recorded with include Carlos Santana, Gil Evans, Gato Barbieri, Michael Brecker, The Crusaders, Paul Simon, Chicago and many others. Together, with Flora, they recorded the albums, Return to Forever and Light as a Feather.
In 1974 Airto formed his first band in the US with Flora Purim. Since then they have performed constantly all over the world and recorded their own albums for major record companies in Europe and America.
Throughout the 70s and 80s Airto remained one of popular music most in demand percussionist. His collection of instruments, along with his knack for playing the right sound at the right moment, have made him the first choice of many producers and bandleaders. His work with Quincy Jones, Herbie Hancock and Paul Simon, along with his contributions to movie sound tracks including The Exorcist, The Last Tango in Paris, King of the Gypsies and Apocalypse Now, represent only a small number of the musical contributions Airto has made over the last three decades. As an educator he often tours Europe, Latin America, Japan and the United States teaching and giving workshops for colleges and music schools.
Airto's love for the music and people of his native country of Brasil takes him back every year to visit old friends and relatives as well as to pay respects to his spiritual guides and elders. Airto has been involved in "spiritualism" since an early age and used to go the "sessions" with his father Jose Rosa Moreira, who was a spiritual healer all of his life.
His lifelong interest in spirituality led him to record The Other Side of This, an exploration into the healing power of music. His vocals, unique percussion style and the work of percussionists from other drumming traditions has attracted an audience interested in world music and the new age movement. In addition, Airto has been advancing the cause of world music as a member of the Planet Drum percussion ensemble, founded by Mickey Hart, drummer for The Grateful Dead. This group of musicians from around the world, including master conguero Giovanni Hidalgo and tabla virtuoso Zakir Hussein, as well as Flora Purim and Babatunde Olatunji, won a Grammy Award in 1991 for their recording of Planet Drum. That same year Airto contributed to another Grammy Award winning ensemble, Dizzy Gillespie's United Nations Orchestra, which received the award for Best Live Jazz Album. Airto also composed and performed his Brasilian spiritual mass for a two special on German television, with the WDR Philharmonic Orchestra in Cologne.
Airto's unique style has influenced the direction of modern jazz around the world. His impact was so powerful that Downbeat magazine added the category of percussion to its readers and critics polls which he has won over twenty times since 1973. In the past few years he was voted number one percussionist by Jazz Times, Modern Drummer and Jazz Izz magazines as well as in many European, Latin American and Japanese publications. In 1995 Airto won the Best Percussionist category for Downbeat magazine's readers poll, Drum Magazine's readers poll and Jazz Central Station's Global Jazz Poll on the Internet. Most recently Airto performed as a guest star with the Boston Pops Philharmonic Orchestra as well as on MTV Unplugged with the Smashing Pumpkins. Airto's latest band, Fourth World featuring Flora Purim, Jose Neto, Gary Brown and Jovino Santos has recorded three albums, Fourth World, Encounters of the Fourth World and their upcoming release, Last Journey. When they are not in the studio creating recordings or CD ROM projects for future releases, they perform throughout the US, Europe, Asia and Latin America.

This is the second of two releases by Airto in the early 70s on Buddah Records in the US. I don't know how this compares to the US One Way CD but both are out of print. This sure beats my late 70s Buddah 2fer reissue on very poor quality vinyl This is more rustic and folk based than Airto's later fusion work.
The most high-profile percussionist of the 1970s and still among the most famous, Airto Moreira (often simply known by his first name) helped make percussion an essential part of many modern jazz groups; his tambourine solos can border on the amazing. Airto originally studied guitar and piano before becoming a percussionist. He played locally in Brazil, collected and studied over 120 different percussion instruments, and in 1968 moved to the U.S. with his wife, singer Flora Purim. Airto played with Miles Davis during part of 1969-1970, appearing on several records (most notably Live Evil). He worked with Lee Morgan for a bit in 1971, was an original member of Weather Report, and in 1972 was part of Chick Corea's initial version of Return to Forever with Flora Purim; he and Corea also recorded the classic Captain Marvel with Stan Getz. By 1973, Airto was famous enough to have his own group, which was signed to CTI and appeared on Purim's sessions. Since then, he has stayed busy, mostly co-leading bands with his wife and recording as a leader for many labels, including Buddah, CTI, Arista, Warner Bros., Caroline, Rykodisc, In & Out, and B&W. Not all of his music as a leader would be called jazz, but Airto remains a very impressive player.

This album is so great and so awaited by Loronixers that we will make something really different here, releasing both LP and CD versions. By the way, I have been discussing the value of Bonus Tracks on CD reissues with a friend and we came to a conclusion this tracks are not really useful and sometimes they even spoil the listening experience. Additionally, I think on most cases bonus tracks are some sort of studio leftovers and they were not included as they were not the artist will at that time. Anyway, terrific album and surprisingly out of print. Let’s see.This is Airto Moreira – Seeds on the Ground | The Natural Sound of Airto (1971), for Buddha Records, featuring a constellation of musicians, such as Hermeto Pascoal, Flora Purim, Dom Um Romao, Sivuca and others. This is the kind of self-explanatory release and I just like to thanks the group of friends that made available the album and the original fist issue cover artwork, great accomplishment to Loronix and great teamwork. I’m also curious to check which version, CD or LP, will be the most popular in the forthcoming days.

Second album, produced in the States, and what a band: Hermeto Pascoal on keys, Ron Carter on bass, Dom Um Romao on percussion, Airto, wizard on percussion and on drums, Severino de Olivera, Guitar and - hello, Flora! Flora Purim adds a lot to this album, like on O Galho da Roseira (totally hippie) and especially on Moon Dreams where she catapults the song to a climax by practically singing (screaming) an orgasm. A trip.