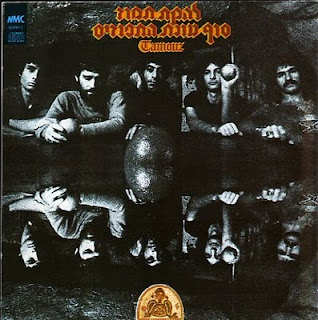 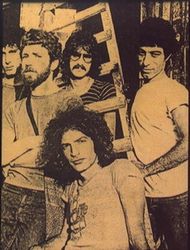 
This is a masterpiece. The best israeli album by far, and a good competitor for a place in the top 100 in my opinion (if only they sang in english!). For all you gentiles (just kiddin'), i would recommend to try and get a hold of this one.

It indeed is over and I'm sad that it is. To be honest, I first didn't believe that I'll like this album at all, as first track somehow disappointed me. This is all I remember from past listenings. However, then something happened and I put this CD into "good ones,will listen again later,but I know now that they're good" stack. From it I pulled this one today and, am surprised. Bass which works great here (not common thing, still not), organs are charming and vocals (+language) are maybe strange (more like unusual), but I would describe this as typical progressive rock/folk at times, even with neat guitar solos (and even one drum solo). But OK, let's stay calm, some songs here really pleased me, while others are more like average. Fortunately, there's no filler, even weaker songs happen.
4(-)/5, but more like better.

Just a week ago, the classic israeli rock band "Tamouz" has united again. Tamouz were the prophets of israeli rock-n-roll, when they released their first & last album in 1976 - "The Orange Season Is Over". The theme song, in the same name, became an instant hit on the charts, and until today stayed an anthem to all music lovers in israel.
The album is built very well, due to the two leaders of the band - Shalom Hanoch & Ariel Silber, who later became two known artists, and made very successful solo careers. So did the other members of the band - the drummer Meir Israel, the eletric guitarist Yehuda Eder, and the bass guitarist Eitan Gidron.
"The Orange Season Is Over", 42:16 minutes long and has only 8 tracks, but still makes it as a classic album. Many of the songs became known without even knowing that they were on the album first, such as "I Don't Know How To Tell You" - who is still a classic rock song & "The Deeper The Bluer", which is truly a prog song (when youl'l hear it - youl'l know...)
I'm truly excited to be the first one who writes a review for this album & for this band, because in israel it was one of the pioneers of rock music (and progressive rock as well), and really taught all the upcoming artists how to do it well.
So will they do a new album, out of the unite last week? maybe, but "The Orange Season Is Over" gives every listener a taste from a good era of israeli rock music.
I will give it 4/5 stars.

Nick Mason's Saucerful of Secrets - Live at the Roundhouse (2020)