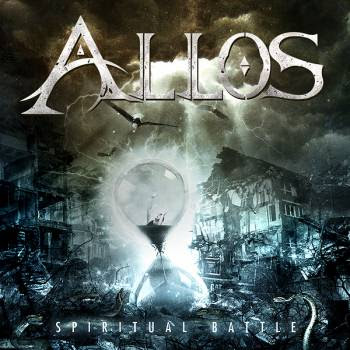 
Brasilian metalband ALLOS gives us their strong debut album within the power metal/prog genre in the veins of Theocracy and their fellow Brasilians Eterna and Angra. Strong Christian English lyrics with female vocals here and there and a solid production! This could easiely be the newcomers of the year.


Allos is a new band from Brazil who released their first album in 2012. They started in 2003 and last year their debut album “Spiritual Battle” was released.
The name Allos means Other and revers to The Holy Spirit. That’s a nice name to have as a band. But also a promising. Let’s check it out.
The albums contains 10 songs with a total playing time of 42 minutes, not bad for a debut album.
The kickoff of the album is “Unknown world” and is an instrumental into and flows very nice over into “Mirror of the Deep waters”, which gives us the full range of power metal at their disposal. This sounds good. Vocals are good, very good actually. Also guitars, bass, drums and keys are very well performed. It’s a nice start to the album, guitar solos followed by key solos and so on. These guys know how to play. “Power of Choice” is strong on the vocals. They remind me on Blind Guardian. “Journey” start calm and quiet, like a ballad, but after a minute the power is released through great guitar solos, fast drums supported by great keys and bass. This is Power Metal as is should be. The female vocals in this song are great and surprising. “Everlasting Love” start with the female vocals in a very nice way, later to altered with the male vocals. This is a very nice lingering song, that builds up great.
“The Hero” stats very fast and continues in that fast paste. Excellent done! “My Spirit” and “Eterna Presente” are two semi-ballad songs . Starting with calm vocals, but after a few minutes more power kicks in. Nicely altered with female vocals. “The Call of Battle” is an instrumental intro leading to the last song of the album “Spiritual Battle” and yesssss, this is fast! And Good! Really good. Great guitar solos with fast bass, this is seriously good!
To conclude this album: Allos is a band to take serious. These guys know how to play and make some very good power metal. My recommendation is that these guys find a label who can seriously support them with the next recording and. And I wouldn’t be surprised that one day they play alongside bands like Theocracy. If ever there was a non-European country that exemplified a national style of power metal, it would almost certainly be Brazil. Ever since Angra shaped the mould with Angel’s Cry in 1993 and perfected the cast with 2000’s Rebirth, numerous Brazilian power metal bands (including Angra themselves) have followed the formula to a greater or lesser extent. Fast forward 19 years, and the influence is plain as day on Belo Horizonte, Brazil’s Allos and their debut album Spiritual Battle.
Now, a lazier soul than I would simply wave off this album as a “poor Angra clone”, but that’s not really being fair to either of them. The comparison makes for a decent starting point, however, and we’ll go from there. Unlike Angra, Allos drops any overt hints of indigenous South American instrumentation and sounds, and also foregoes the same level of technicality that Loureiro and Bittencourt routinely achieve.
Allos takes a rather straightforward, Christian approach to their lyricism. However, while the words are a bit awkward coming out of Celso Alves’ mouth, they’re not representative of the clumsy approach employed by some Christian bands. Alves himself is a decent singer, and it is painfully obvious that Edu Falaschi has had a strong influence upon the young vocalist. The occasionally forced strain in his voice is one that seems to find its way to a number of Brazilian vocalists, certainly. While Alves is all right, he doesn’t boast an exceptional range, particular energy, or an extraordinary level of charisma.
Despite the glossy layers of keyboards, the occasionally hyperactive bass (definitely a plus), and the fire-spitting guitar solos (see “Power Of Choice”), the rhythm guitar is terribly simplistic at times, and makes for a tremendously basic foundation that Allos never quite grows beyond for the duration of the album. Also, as this is quite purely a power metal album, I find the lack of properly stirring choruses to be a measurable disappointment, with the soft “Everlasting Love” lacking any sort of true melodic hook to redeem itself. This ballad is certainly the least remarkable tune on the album, while I’d class “The Hero” and the self-titled closer as the strongest, with their speed, tasteful keyboard backdrop, and superior guitar and vocal melodies.
Fans of Age Of Artemis and Angra’s own power metal glory days will appreciate Spiritual Battle to varying extents. I myself find the album lacking the sheer memorability of the former, and the effortless, graceful complexity of the latter. However, I’d say that Allos is a band to watch. If they progress beyond their highly formulaic infancy, there is clear talent from every corner that the quintet could capitalize upon with ease.