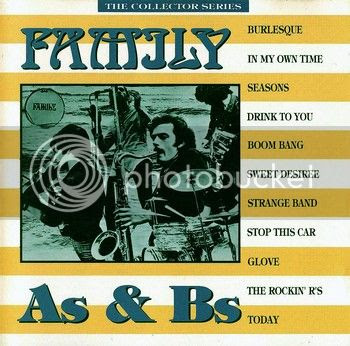 Family were a hugely important rock group in British rock history. The band's sound has been described as progressive rock, psychedelic rock, acid rock, folk rock, jazz fusion and hard rock. Regardless of categorisations, Family had a very distinct sound, and often complex musical style. Nowadays, they are very much neglected. This is the great progressive rock band who played classic rock songs like "No Mule's Fool", "Burlesque", "Weaver's Answer", "My Friend The Sun", "In My Own Time", and many more. Family were famous for their live performances. One reviewer stated that they produced "some of the rawest, most intense performances on stage in rock history" and "that the Jimi Hendrix Experience were afraid to follow them at festivals". The title A's and B's refers to all the singles released by Family between 1969 and 1973. If you are a family fan you will have all of these tracks in your collection. One of Family's most popular songs, "The Weaver's Answer" was strangely, never officially released as a single and is not on this album. All the songs on this compilation album are great but are definitely not the best example of Family's more eclectic music that appeared on their albums. Many of Family's single releases were in the "lightweight" vein with more acoustic elements. Family really cut loose on their albums and displayed their great unique rock side. This is not a criticism of this album. All these songs are terrific. You can't argue with the quality of songs like "No Mule's Fool", "In My Own Time", "My Friend The Sun", and the great "Burlesque". It's simply that this album is mainly composed of the more "commercial" side of the band's music that was originally packaged to sell. Just compare this "commercial" music with the commercial rubbish being released today and have a laugh. Family played their last gig in Leicester, England in 1974, leaving Roger Chapman & John "Charlie" Whitney to perform together in Streetwalkers. Chappo went solo in 1979. If Family had conquered the elusive Stateside market, things might have been different for this great band. However, America was never kind to Chappo and his mates. Sensibly, they turned to solo ventures before their energy and creativity started to decline. The lead vocalist, Roger Chapman remains one of the great icons of British rock music, and has one of the most distinctive voices in rock history. This album is HR by A.O.O.F.C. The band has left a legacy of great music. Listen to Family's classic "Bandstand" and "Family Entertainment" albums, and Roger Chapman's "Mail Order Magic" and "One More Time For Peace" albums, and search this blog for other Chappo/Family releases