Jukka Tolonen - A Passenger To Paramaribo (1977) 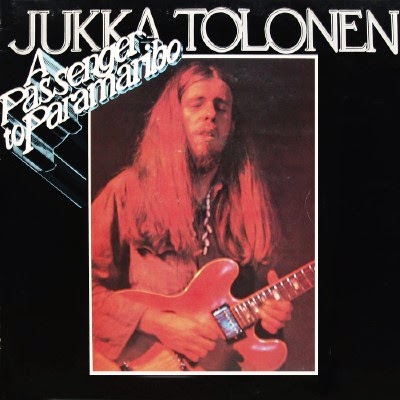 
Jukka Tolonen is not only Finland's national guitar hero but also one of the world's most respected guitarists. For the past 4 decades, he has captivated audiences through Scandinavia and Europe with his powerful and passionate works. He remains of the the most diverse guitarists of today, being equally proficient in a blues, rock, or fusion jazz environment.
Born in Helsinki in 1952, Tolonen first came to center stage in 1969 when a group of young Finnish musicians merged their collective talents to form the widely popular rock/jazz fusion band Tasavallan Presidentti, who were to record four critically acclaimed albums. During this time, Tolonen also recorded two albums with another well know band Wigwam. These recordings would establish Tolonen as a powerfully explosive and technically spectacular guitarist.
However, it would be his soon coming solo recordings that would really turn the music world upon its collective ear. His self titled debut recording, followed by "Summer Games", "The Hook", and "Hysterica" would set new standards for jazz fusion recordings and remain popular world wide even unto today.
Throughout the years, Jukka Tolonen has added his unique wizardry to recordings by Bill's Boogie Band, Piirpauke, and most recently a live recording from Tasavallan Presidentti. He has also recorded jazz fusion albums as the Jukka Tolonen Band and a couple of outstanding fusion flavored rock albums as the Jukka Tolonen Trio. These recordings, though varying in style, consistently demonstrate Jukka Tolonen as one of the premier guitarists of this or any other generation. An exciting entry in the jazz/fusion with funk overtones category, "Passenger to Paramaribo" listens on par with Jeff Beck's classic fusion albums "Blow by Blow" and "Wired". The band is tight throughout, enhancing the funk feel along with the crispy clean almost glossy production. "Punks" and "Air Rock" are particular highlights from this 1977 release. A sorely underexposed figure in the jazz rock world, This album is waiting for inclined parties to dive in. If you like Isotope or Colosseum II or Sloche or Jeff Beck's two records I mentioned, give this one a try. It also reminds me of a Larry Coryell guitar fusion with funk release, "Aspects".

I see some Santana in here (maybe i'm wrong). I'ts a very enjoyable album but i couldn't play it more than once. I'ts like eating something not nice, but if you are starving you'll have it anyway. I'm not saying this is a bad album, but is not quite prog for my taste. Anyway, if you like guitars you hear it.

Jukka Tolonen is one of Finland's best known Prog musicians. His solo works are generally instrumental, but this release finds Bill Carson sing on the closing track. Surprisingly, it comes off quite well as a laid back winding down after a generally high intensity "tour the force" of the preceding tracks. This release is perhaps more dynamic and less subtle than Tolonen's previous two albums, but still strongly in the Jazz-Rock vein, this time coupled with some unmistakable Funk. Nothing really wrong with that and the funky approach seem to dominate Tolonen's future releases for the corresponding time period.
A versatile artist who in 2004 eventually arrives at dedicating a whole album to John Coltrane with a title "Cool Train" (yet to be added to his rather incomplete discography on PA).
"A Passenger To Paramaribo" represents excellent musicianship bursting with energy. The odd, lyrical piece "Tanja" (dedicated to his partner) is a welcome interlude. (Curiously, in 2008 Tolonen was jailed for stabbing his partner. By the time of his release in 2010, he developed osteoarthritis and was no longer able to play the guitar.)
Special mention is due to legendary Finnish record label "Love Records" that were instrumental in supporting Finnish Prog till they went out of business. Their logo is charmingly cheeky, but you'll have to Google on that to see it for yourself.
This album is definitely above 4 and contrary to some of the funky bits, it's only a bit short of 5, so to be pedantic, it's an excellent addition bordering on a Prog masterpiece.