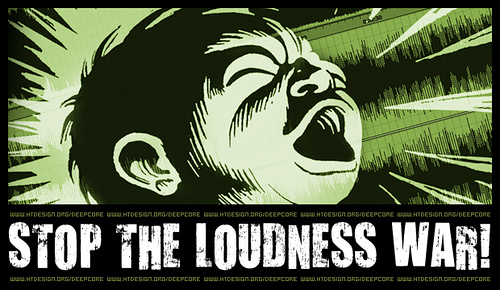 
The Death of High Fidelity In the age of MP3s, sound quality is worse than ever

Sounding Off on the Sound Wars: Top Producers and Artists Speak Out

"This is what I think is happening: Everybody has iPods, so you can't get them that loud. So they have a algorithm called a "finalizer" — it's not that new, but the way people are using it is new — and it makes your music sound louder. People will ruin their records and CDs. I was really stunned by the CD the guy gave me when I listened to it at home — it sounded crazy! It was like, abort mission! Supposedly it sounds fine on your iPod, but if you take the CD and put it on your hi-fi CD player you can hear the digital clipping. It's a big news story over in England." — Kim Deal, on mastering the new Breeders album, Mountain Battles

"Compression is a necessary evil. The artists I know want to sound competitive. You don't want your track to sound quieter or wimpier by comparison. We've raised the bar and you can't really step back." — Butch Vig, producer and Garbage mastermind "We're conforming to the way machines pay music. It's robots' choice. It used to be ladies' choice — now it's robots' choice." — Donald Fagen, producer and Steely Dan frontman

"I believe that if a vocalist is hyper-tuned, it's less personal. I have no aversion to using Auto-Tune when I have to. But I think listeners can hear it." — Brendan O'Brien, producer of Pearl Jam, Rage Against the Machine and Bruce Springtseen's The Rising and Magic

"I think there's been a huge shift in how people listen to music. They used to get as good a stereo as they could. Now they want an iPod. And the audiophiles have moved on to multimedia. But to get the content to people, you have to play by their rules." — Matt Serletic, Matchbox Twenty and Collective Soul producer and former chief executive, Virgin Records

"A&R people like the compressed aesthetic because they can take it to the radio. They think if they want to have a hit record they have to spend a lot of money so they want to cover themselves. But if you think about the classic records, none of them are squashed." — Mitchell Froom, producer of albums by Los Lobos, Elvis Costello and others

"I find it quite interesting, and I think its instructive, that if you focus on one area of the music business — you could generally call it music for people over twenty-four — and you look at the last ten years and look at records that have come out of nowhere, that no one's putting any money behind and have takes off, the two things that come to mind are the Buena Vista Social Club and Norah Jones. And those records were made in the most old-fashioned ways you can imagine." — Joe Boyd, producer of several Richard Thompson albums and R.E.M.'s Fables of the Reconstruction

"I cant tell you how many times someone comes in and plays me something he wants mastered and I'll say, 'Do you want to make it slamming loud or retain some of this great sound?' They'll say, 'We want to keep it really pristine.' Then the next day they'll call me and say, 'How come mine isn't as loud as so and so's?' " — Bernie Grundman, mastering engineer "With the Beatles or Rolling Stones, they'd be a little sharp or flat, but no one would care — that was rock. Now if someone's out of tune or out of time, they treat it as a mistake and correct it." — Ted Jensen, mastering engineer