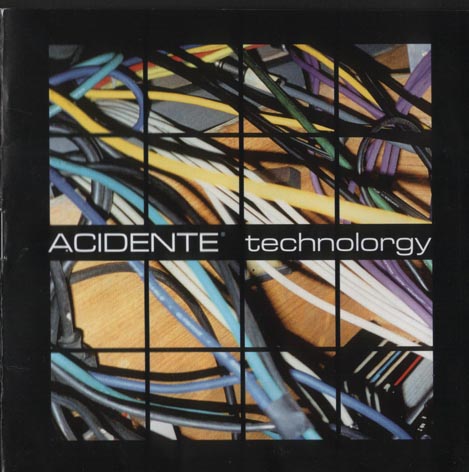 Although the Brazilian band Acidente has existed since 1978, "Technology" is only the fourth official album by them. All three of the previous CDs of the band were released during the 1990s. These are "Quebre Este Disco" (1991, was reissued with bonus tracks in 2000), "Gloomland" (1994), and "Farawayers" (1996).
Everything is highly original and both very complex and intriguing on this all-instrumental album. The soloing parts of each of the band members are here not only masterful and intricate, but also very tasteful. Overall, there are little repetitions on "Technology". Most of the tracks here feature lots of different musical events, directions, and dimensions that change each other more than merely frequently and almost exclusively with the use of complex measures. As for the stylistic aspects of this very technical (sorry, masterful) "Technology", there is somewhat of a divine between the six and the seventh tracks of it. With the exception of the 'side-long' epic Factotum (3), all compositions that are bunched up on the first half of the CD (tracks 1 to 6) are about Classic Symphonic Art-Rock with elements of Classic Prog-Metal, all of which, nevertheless, has a very fresh, truly modern feel to it. These are Enough, Anfa, Outright, Autumn Down, and 1980. I always feel a great pleasure when I hear passages and solos of an acoustic guitar that are interwoven with basic musical textures, and all four of the pieces that are located on tracks from 2 to 5, including the epic Factotum, are very rich in wonderful, 'acoustically electric', arrangements. Overall, 1980 (6) is closer to Enough (1), as there are neither solos nor passages of an acoustic guitar on both of them. Apart from the other arrangements though, 1980 features the unique and amazing interplay between the symphonic passages of piano and quite specific solos of hand percussion instruments performed here by a guest musician. The parts of piano however, are featured only on a couple of tracks here (also - on 7), while those of strings are present on a few compositions. But then, the solos and passages of organ and (especially) synthesizer are practically ubiquitous on "Technology", as well as the parts of electric and bass guitars and, of course, those of drums. Well, it's time to describe the second half of the album, and I'll start doing it with the use of intentional repetitions, for which I am sorry as usual. So, with the exception of the albums closing track, Round Trip (13), which is another epic here, all compositions that are bunched up on the second half of this CD are notable for the presence of elements of Classical Music in their structures. Even though all of them were for the most part performed with Rock instruments and with the use of complex stop-to-play movements, etc, etc, in the arrangements, each of these pieces has a classical feel to it. The music on tracks 7, 10, 11, & 12 (see track list, if you find it necessary) represents a blend of Symphonic Art-Rock and Classical Music, and that on tracks 8 & 9 a union of both of the said genres with Prog-Metal. There are plenty of orchestral arrangements on most of the said tracks, though the passages and solos of acoustic guitar are present only on one of them: Across the Time (10). But then, 'acoustically electric' arrangements are notable on both of the epic compositions on the album: Factotum and Round Trip (3 & 13). The stylistics of both of them is a blend of Classic Symphonic Art-Rock and Prog-Metal, though on the first of them, purely symphonic textures alternate with those of Symphonic Prog-Metal.
In my honest opinion, all of the compositions that Acidente presented on their fourth official CD, "Technology", are masterpieces, though, of course, such large-scaled forms as those on the 'side-long' Factotum are especially attractive, as always. Here, I will once again dare to say that "Technology" is by many points on par with many of those essential Progressive Rock masterworks of the 1970s that we regard as the gold fund of it. Highly recommended!

Very good!!! Instrumental, but very memorable , even CATCHY prog from South America. Reminding me of DREAM THEATER and GENESIS sometimes - not much bombastic and professional ,but sincere and emotional. Some national flavour is added in 6th track due to ethnic percussion. Syncopation in closing track is so driving!!! The longest track ("Factotum") has several awesome bits - I dare to regard them as classical ones for a Prog fan. Proggers should not miss this album!I wonder why it is in Prog- Related category - this is superb Art-Rock record, Sympho Prog meets Hard Rock I'd say! Highly recommended to any Prog fan; almost the same way beautiful as QUATERNA REQUIEM - another South-American highlight and a recent discovery of mine!!!

To be honest I didn´t know anything about the existence of this Brazilian band and that has impressed me. Although the band is active since 1978, they became to be known after the release of “Em caso de Acidente... Quebre Este Disco” (1990) and “Gloomland” (94). The current line up is formed by Ary Menezes on bass and acoustic guitar, Mario Costa on drums, Renato Borges on electric guitar and Paulo Malária (aka Paulo Izecksohn, alma mater) on synths.
The album has great songs like “Factotum”, with has a blend of different styles: from the lyrical Camel to the ELP megalomania, all spiced with a great masterly in the transitions. Very interesting is also “Autumn Dawn” and “Anfa” which flow with Anthony Phillips airs and his acoustic guitars. Despite short in time “Enough” and “The Sweet Years of ’73” are also very interesting. Finally, we can appreciate another influence of 80’s Rick Wakeman in tracks like “Across the Time” or “Where Whisky Comes From”.
This is a good CD that, although it sounds really actual, has a lots of classic influences. Great developments, good production and sound quality, with musicians very skilled, specially Paulo Malária on keyboards. He is capable of mixing different sonority and styles all over the record. Recommended.